It was rainy the day Dave and I got together to talk about Moby Dick. Rainy and howling windy. It felt like a tempest. We recorded the episode in Lawrence Patchett’s writing shed, Sarah Bainbridge was on her way over, we were having afternoon tea together and ended up playing Scattergories. I remember we got a food starting with ‘C’ and a State starting with ‘A’ and they didn’t mean ‘anxiety’ which was what our team put down.

I read Moby Dick over Christmas last year. I remember tweeting at the time that I was finding it frustrating and absurd and sublime in turns. In parts I found myself racing through page after page, other times I found myself trying to lose the book so that I didn’t have to return to a section I was finding hard going (I left it one buses, at people’s houses and at work – people kept calling and writing, ‘Your book,’ they’d say, ‘Moby Dick’). It was nothing like I expected it to be, it was like nothing I’d ever read. I’ve been writing about the ocean for about a year now and I frequently felt like that was a hopeless task in the shadow of this book.

Throughout, it was Dave that kept me going. ‘Have you come to that bit with the boy?’ he’d say. ‘What about that chapter on whales?’ he’d say.

Getting to the final page, that final image made me think about how great reading is. No one can ever take that book off me now. A version of it is in me.

I enjoyed talking to Dave about the versions we had in our heads and our hearts. It was a great conversation and I hope you enjoy it.

In the introduction, I mention an event Carl Shuker and I are doing next Thursday (31/10) you can read about it here. While I type this there are still a few places left but you’ll need to book before the night.

David Fleming is a writer currently living on the Kapati Coast. A graduate of the IIML’s PhD program and the Iowa Writers’ Workshop, his fiction has appeared in various publications in the U.S. and New Zealand. When he’s not teaching his kid how to throw a baseball, he’s working a novel in which almost no whales are harmed. 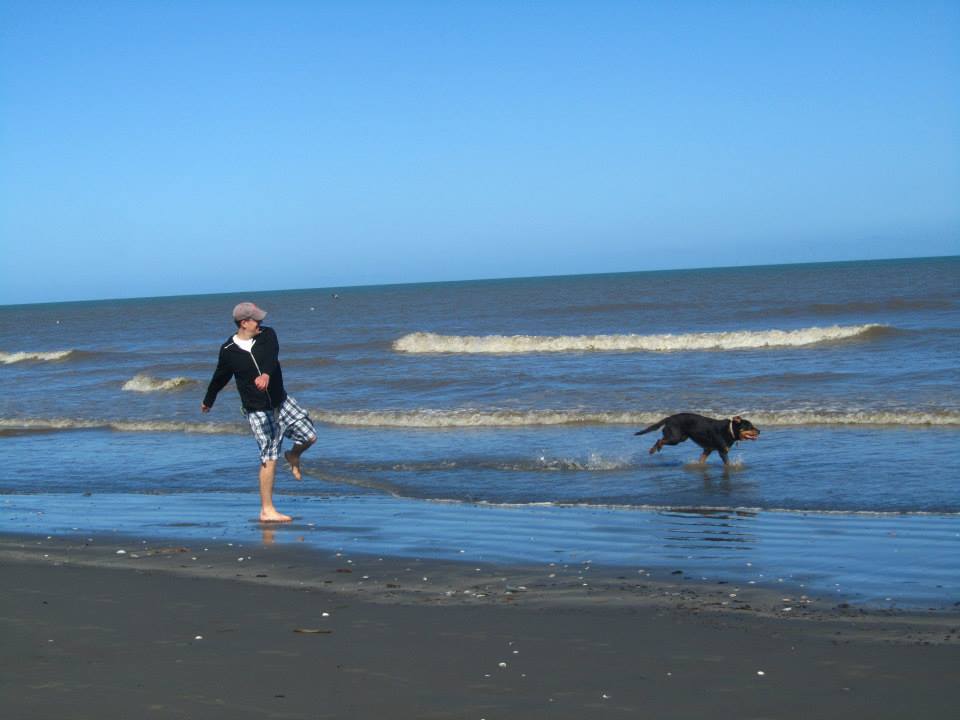 Dave throwing a stick for Lorry and Tina’s dog.

Or you can listen right here thanks to Soundcloud:

In a fortnight, a special Roadwords episode. Roadwords was a tour of the South Island which Lawrence Patchett, Laurence Fearnley, Tina Makereti and I did (with the generous support of Creative New Zealand). Along the way I recorded some thoughts and talked to some people.

One thought on “Episode 3: David Fleming and Pip Adam talk about Moby Dick by Herman Melville”