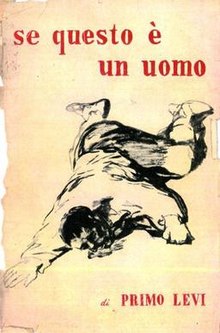 July 31, 2019 is the 100th anniversary of the birth of Italian Jewish chemist, writer, and Holocaust survivor Primo Levi.

On the occasion of Levi’s centenary, Giacomo Lichtner has written ‘One Hundred Years of Primo Levi’, an essay offering ten reasons to ‘re-read and re-consider the empathy, rage and understated greatness’ of If This is a Man the memoir which describes Levi’s arrest as a member of the Italian anti-fascist resistance during the Second World War, and his incarceration in the Auschwitz concentration camp (Monowitz) from February 1944 until the camp was liberated on 27 January 1945. Published in 1947, If This is a Man seems sadly relevant to our present moment.

You can read Giacomo’s essay online at Overland Journal

Giacomo Lichtner is Associate Professor of History and Film at Victoria University of Wellington and serves on the board of the Holocaust Centre of New Zealand. He is the author of Film and the Shoah in France and Italy (2008, 2015) and Fascism in Italian Cinema Since 1945: the Politics and Aesthetics of Memory (2013).